Starlink Satellites Over NZ Skies: What Do They Actually Do? 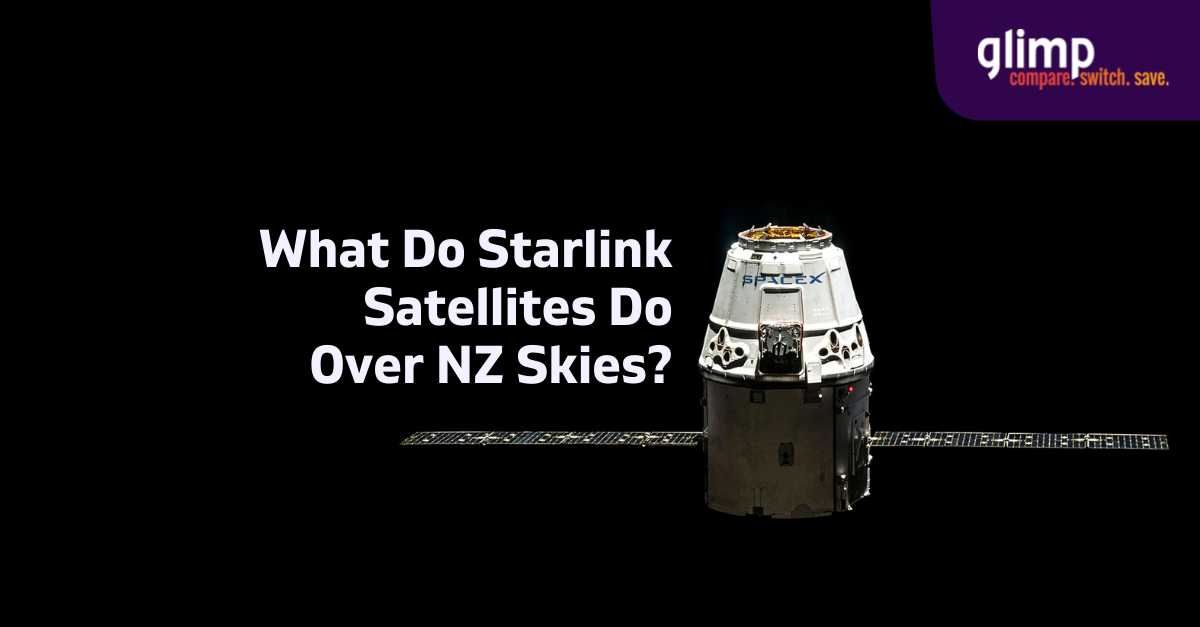 Starlink is launching in New Zealand by the second half of the year. You can reserve an order now for $159 a month for the starter kit, $799 for shipping, and $114 for handling on the Starlink website. While it’s not official in the country just yet, its satellites are already roaming around over our skies — especially in the North Island.

Space X’s Starlink satellites were visible in the night skies, brightening up Wellington and New Plymouth. It first happened last 7th March at around 8PM, and it’s expected to happen more often as the tech company finally launches its services here in NZ. Just this 16th May, around 40-50 lights were also spotted over Auckland skies!

Aside from being a treat to our eyes in the night sky, what do Starlink satellites in NZ really do? How can this benefit your internet connection? Is there a Starlink tracker where you can see these satellites over NZ? How can it affect rural broadband in New Zealand?

What do Starlink satellites do?

The answer is simple — they deliver and connect you to the internet regardless of how remote your location is.

Starlink satellites are located 200-550 kilometres off the ground. Unlike traditional broadband which relies heavily on cables, these satellites can connect you to the internet even if there’s no fixed wiring in your area. Instead, they send low-latency high-speed signals to a satellite dish connected to your residence. As an orbital satellite internet, it uses Google cloud services to back up data and guarantee fast and secured broadband.

Aside from helping hard-to-reach locations experience fast internet speeds, SpaceX plans to use these satellites in its Mars colonisation programme.  Founder and CEO Elon Musk said in March 2020 that their ultimate goal is to “make life multi-planetary.”

How do SpaceX’s Starlink satellites work?

Satellite internet isn’t new in New Zealand. They’ve been around for many years, servicing Kiwis in remote communities. These satellites are geosynchronous equatorial orbit (GEO), which stay at the fixed position above the ground.

GEO satellites need to be placed high up so they can distribute the internet at the speed of light. The caveat is, they don’t work well against high buildings and tall mountains. They’re also highly susceptible to environmental factors like strong winds, rains, earthquakes, fog, and more! Since your receiver at home is located far away, it can result in high latency as well.

What makes Starlink's satellite unique is the way it works. They use low Earth orbit (LEO) satellites, which stay in outer space and revolve around the planet. One LEO satellite can cover up to two or more areas of coverage from GEO satellites. They blast internet signals directly from space, so they’re also not susceptible to latency.

Is Starlink the only company to offer LEO satellite services?

They’re not the only company to set its sights on LEO broadband networks. OneWeb, in partnership with Airbus, may finally release LEO satellites in space by the end of the year. Shortly after, expect deals and prices to be announced in selected countries.

Another tech giant — Amazon — is also developing Project Kuiper, backed by Amazon Web Services. The EU and China are also planning to launch LEO networks for their residents, but there’s little to no chance of them ever coming to New Zealand.

How many Starlink satellites are over NZ skies?

Starlink satellites are constantly revolving around the Earth, so the exact number of satellites above NZ varies greatly. There may be even days where there are no satellites over NZ skies. Nonetheless, Starlink has over a thousand satellites across the globe, launched in May 2019. By 2027, SpaceX is looking to launch 42,000 satellites in orbit to form the Starlink constellation.

With more Starlink satellites, the chances of seeing them over NZ skies increases. If you want to see them roaming around the planet and illuminating the night sky, SpaceX has a tracker just for that! Visit Find Starlink to check satellite locations in real-time.

How can Starlink satellites improve broadband in NZ?

The New Zealand government has been committed to its initiatives to improve broadband throughout the country. Ultra-fast Fibre Broadband (UFB) and Rural Broadband (RBI) Initiatives are continuously rolling out, even amidst the economic downturn caused by the pandemic.

Through this initiative, more than one million of the population can easily get access to fibre! Almost 90,000 households can now take advantage of at least a wireless satellite broadband. Ultimately, the goal is to connect up to 99.8% of the population.

As mentioned, the biggest drawback is these internet services can be unreliable at times. Kiwis in remote communities may get connected now, only to be disconnected a minute or two after. With the entrance of Starlink in NZ, there’s an option to ditch this unreliable service.

New competition is always great as a consumer, but the same can’t be said for local wireless internet service providers (WISPs). If they don’t keep up with their competitors, it may be the end of their business.

To stay above the competition, WISPs may be forced to step up their game and improve their speeds. They may also even offer lower prices and discount deals on top of their better internet services. The more options to choose from, it’s always better for you.

What’s more, local providers may even exert even more resources in improving coverage and reliability of broadband services across the country. Or, they may also speed up their initiatives to compete with a tech giant like SpaceX.

Whatever it is, you can expect better services — especially if you’re on a rural, 4G or satellite broadband  — with the introduction of Starlink.

Should you preorder Starlink broadband at your address?

If you’re sick and tired of slow broadband speeds, pre-order Starlink now! Orders are on a first come, first served basis, so the earlier you reserve — the better! To reserve a slot, simply visit Starlink’s website and enter your details.

For any reason that Starlink may not appeal to you, there’s always a wide array of rural, satellite, 4G, and RBI plans to choose from the leading providers in the country. Some internet companies even focus on connecting rural NZ, so you can trust their speeds and services to be fast and reliable most of the time.