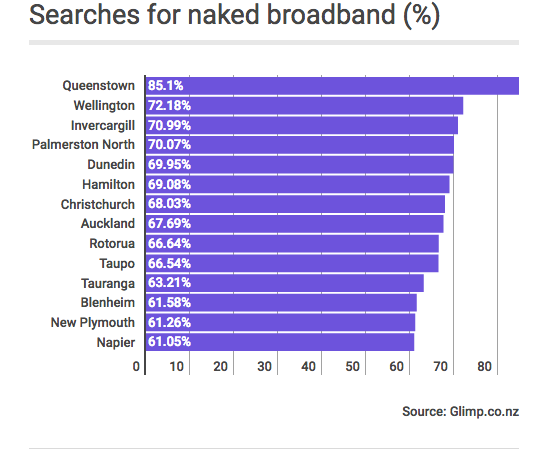 Demand for naked broadband has increased by 22% in New Zealand since 2016, according to data from broadband comparison website Glimp.

In January 2016 58% of visitors to Glimp were looking at naked broadband plans. In June of this year the number had risen to 71%.

And it seems internet users in Queenstown are at the forefront of this trend. Search data shows that 85 per cent of queries from Queenstown residents in the last year were for naked broadband plans.

Next up was Wellington where 72% of searches were hunting out naked broadband deals. They were followed by Invercargill (71%) and Palmerston North (70%).

While canny Southerners may be at the forefront of seeking out a better deal, the general trend is towards naked broadband plans in New Zealand, says Glimp CEO Michael Speight.

“Kiwis know value when they see it and have been quick to adapt their preferences as landlines have become less and less necessary,” he said.

Speight says a contributing factor in the rise of naked broadband is the increase in plans offering consumers unlimited data.

“With the vast majority of broadband plans also being unlimited, it seems people are making the most free apps such as Whatsapp and Viber to call friends and family, eliminating the need for a landline.”